From a rough to a finished cover

New clients often ask what the process is to get from an inital brief to a finished piece of art. So I thought I'd blog with an example of a start and end point - in the future I'll do another example with more of the stages in between.

I've been doing a bit of work for a startup company who are producing a series of books called the Definitive Guides. I did a couple of initial covers as an initial commission and they recently contacted me to produce another.

I'd worked with them before so knew more or less what was wanted. They sent over the book title "The Yorkshireman's Definitive Guide to Extravagance".

So here's the initial draft 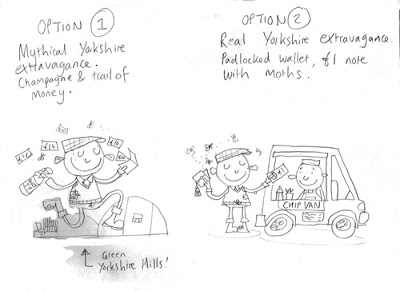 I usually provide a few ideas, just sketches at this stage - just to get discussions going. In some ways, the rougher the better as that makes it clear to all involved that it's just an initial draft, a starting point to get the ideas flowing.
The client fedback. They liked the more realistic image featuring the traditional thrify Yorkshireman - but how about something to make it more Yorkshire. We settled on the rolling Ilkley Moor and the Ilkley Moor Chip Van and I produced a range of images with different colours for final approval.

And here's a zoom of the main image. The style is supposed to be kind of doodley and loose rather than smooth vector art I often do (see http://www.johnaabbott.com for examples of different styles of cartoon and illustration). 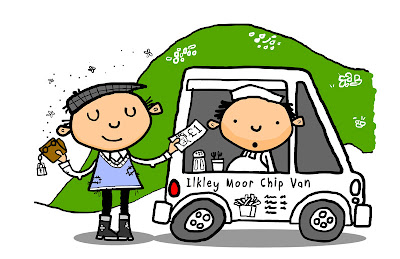 So that's it and looking at that chip van is making me hungry ! Anyone for chips ?
Posted by John A Abbott at 05:09 No comments: 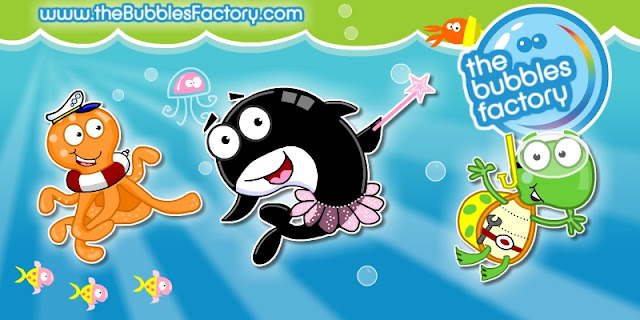 With a deft flick of the switch The Bubbles Factory website is now live !
Sometimes I think it would be great to have a fish tank - all  those relaxing bubbles and aquatic life. But I can't face the responsibility of feeding the fish and cleaning green slime off the glass with an old sock. But no need - just visit theBubblesFactory.com ! There's moving bubbles and an Octopus that waves at you - what more could you want. Also it means there is still space on kitchen worksurface for your fancy Dualit toaster !
Best wishes to Martin and all at The Bubbles Factory - it's been great working with you guys on designing and developing the cartoon characters and the website. The play gymn itself sounds absolutely amazing - the Rolls Royce of play gymns - I can't wait to go and hop in the ball pool myself ! 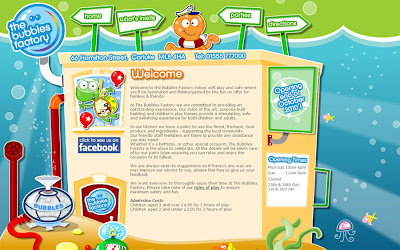 I'm nearing completion of a great job for a children's indoor soft play company based in Scotland.

It was one of those great briefs where you get to take everything from initial character design, to the final website design with a little Flash animation thrown in too.


Here's a sneaky peak of the website - I'll update with more details over the next few days. 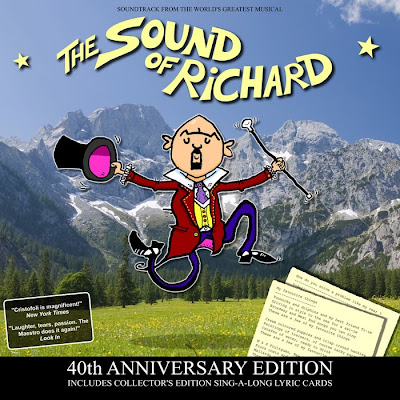 Most of the work I do is for corporate clients, but I've just had a run of people commissioning cartoons for gifts for weddings, birthdays, retirements and so on.

These are always fun jobs because you get to learn all sorts of amusing and just plain weird facts about the individuals you're illustrating. People really open up.

Also after spending too much money on another bucket of Indian Ink and fancy, shmancy paper and too long repeatedly drawing and re-drawing a single illustration I've decided I'm going entirely digital from now on.

This means that I can create better quality illustrations with brighter, more vibrant colours and where relevant include photo imagery (as above) to broaden the range of possible effects.

If you want something similar please get in touch.
Posted by John A Abbott at 14:06 No comments:

Earlier this year I did some work for a chain of nurseries based here in England. Their logo featured a little boy dressed as a toy soldier (named Little Pip) and they wanted the character redesigning and updating. I blogged about it in January.

They were really pleased with the new character design - so much so that they said they were thinking of getting him turned into a soft toy for the kids and maybe even a full life size mascot. Woohoo! The kids could meet a giant Little Pip just like they can meet a giant Mickey Mouse at Disneyworld! *

Well they've only gone and done it! Brilliant! Little Pip pops over and gives us the thumbs up! My only thought is that maybe his head is a bit small compared to the original design - but I suppose nobody likes a bighead! 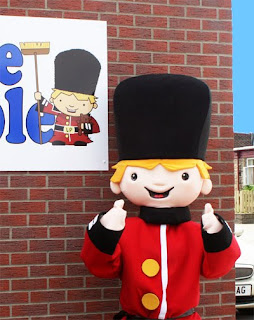 * Well a bit like anyway ... if you imagine Disneyworld without the exciting rides and sunshine!
Posted by John A Abbott at 04:45 No comments:

Where do cartoon ideas come from ?

I'm putting together the latest cartoon strip for a regular corporate client I have. It often takes a while to get the ideas flowing for this job and then about seven appear at once. So at the moment I'm sat here at the ideas table sipping strong tea, doodling and waiting for the first bolt of inspiration to strike (or the kids to come home - whatever happens first).

Anyway for interest, here are a couple of recent cartoon strips.

Yes I know they're the size of a pea. There are 2 solutions to this ... either
i) sit really close to your monitor and squint and imagine what they are about
or
ii) click on the cartoon to see a bigger version

The Grass is always greener ... 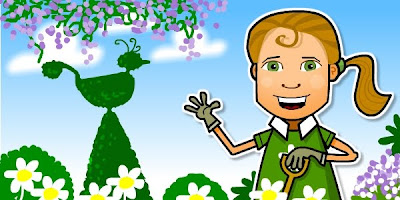 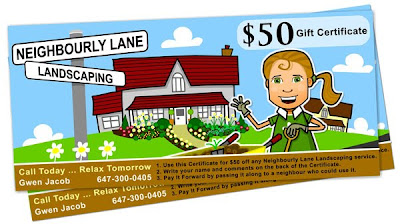 I recently completed some images for a landscaping company in Toronto for use as business cards, advertisements and gift certificates. It featured a cartoon version of the company owner as a basis of the company logo - I've done a number of jobs like this and they're always fun.
Now if only my garden could look as swish as that - at the moment my lawn looks like the set of Little House on the Prairie...
Posted by John A Abbott at 02:07 No comments: 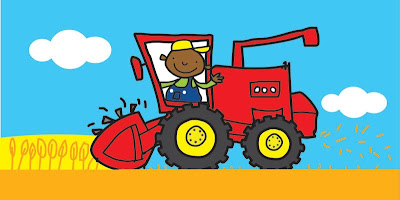 I recently completed work on a series of 10 tiny children's board books all about transport for Make Believe Ideas.
This project was like a great big game of Pictionary. I had to draw something like 50 pictures of all sorts of different cars, bikes, trucks, planes, diggers, trains and capture their essence on the page so they were instantly recognisable.

Additionally, I tested out a new drawing style that I've been playing with for a while and was pretty pleased with the results.

So here are some excerpts to whet your appetite! Another fun job! 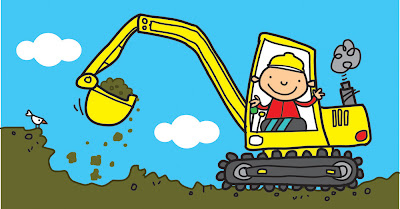 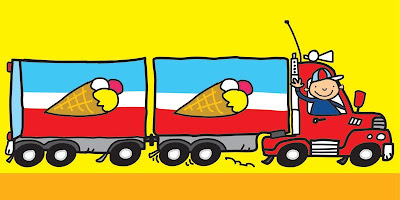 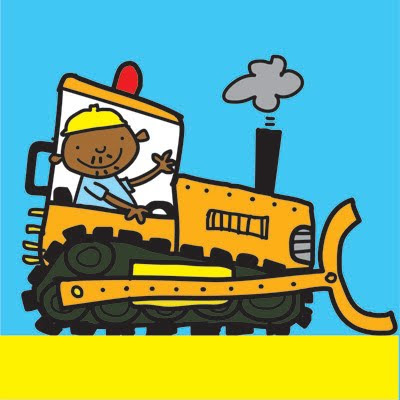 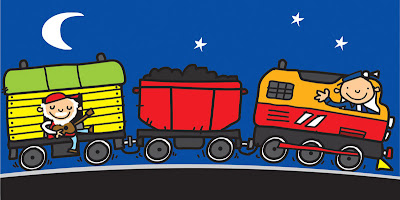 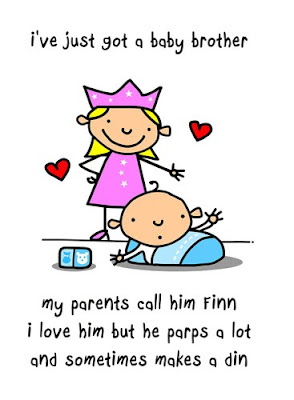 He's called Finn and as the card on the left says when he's not sleeping and feeding he seems to enjoy parping and testing out how loud his voice can go.

This card was created with my 3 year old daughter's help. She more or less made up the rhyme - she seems to like doing this. Over Christmas she managed to embarass me on a number of occasions in public by singing Jingle bells with her own words ... it went "Jingle Bells, Botty smells".


Daddy the red faced reindeer!
Posted by John A Abbott at 13:57 No comments:

No no no! I don't mean that the Client is as rough as a badger's bot. Au contraire ... no no and thrice no! Clients are always extremely nice and lovely. I'm using the apostrophe to indicate possession. This is a post about the different ways clients show me their briefs *

Generally it's a lot of words, but other times people show what they'd like with pictures. Here is a great brief I got this week from a client I've worked with previously. He's a great guy, full of energy and he definitely likes to communicate with pictures. The image below shows his picture on the left and the final design on the right.

Now that was a clear brief. The picture practically drew itself!
See this image and others similar on our Cartoon Character Design portfolio pages.

* i.e. requirements, not underpants
Posted by John A Abbott at 16:06 No comments: